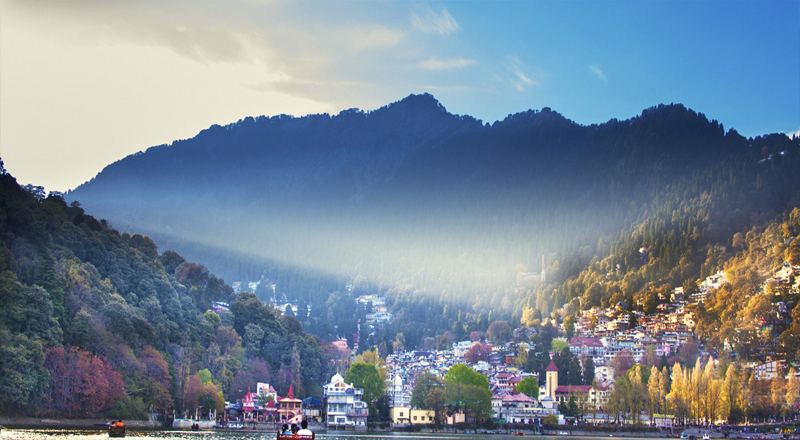 Places to Visit in Nainital - Sightseeing and Tourist Attractions in Nainital

Nainital is among the best known hill resorts of India famous for its striking and natural splendor. The scenic charm of this pristine hill station calls on a large number of tourists to spend pleasurable and memorable holidays amidst serene and scenic ambiance. It is a beautiful hill resort situated at an altitude of 1,938 meters above sea level and derives its name from the Naini Lake. Along with the scenic charm, this hill resort is also one of the 64 Shakti Peethas in India. Based on the Hindu mythology it is the place where Sati's eyes (or Nain) fell down, and hence this place was named as Nainital.

Nainital is among the most famous tourists spot in Uttarakhand and offers many sightseeing places. The major areas for sightseeing in Nainital are listed below :

Nainital district is named after this pristine lake with a perimeter of 3.5 km situated amidst 7 high mountains attracting people with its enchanting beauty. The Naini Lake is the most prominent spot when you got for sightseeing in Nainital. It is a paradise for the adventure lovers as it is well suited for boating, paddling, yachting etc. The Naini Lake is divided in two parts namely Mallital (Northern end) and Tallital (southern end). Both the areas are shopping centers with the shops offering varied items. The lake can be explored from one end to the other and one can enjoy the peace of the setting. The view of the lake reaches its majestic height during the night when it gives a feel of a city under the lake. The lights of the whole city are reflected by the stagnant waters of Naini Lake forming an enchanting view. Nainital is an ideal destination for people looking for a calm getaway and even for adventure lovers, nature lovers, poets, families, writers and honeymooners.....Read More

The Mall Road joins the two parts of Naini Lake, Mallital and Tallital, and is the busiest road in town. It is officially known as Govind Ballabh Pant Marg. The Mall Road is the business and tourism center of Nainital filled with shopping centers, banks, hotels, restaurants, travel companies, street shops etc. During the holiday season of May and June vehicles are not allowed on the Mall Road as the point is famous among the tourists and is most enjoyable while a stroll from one end to another.....Read More

Naina peak, also known as China peak or Cheena peak, is positioned almost 6 km north to Mallital. Naina peak is considered to be the highest point of Nainital, situated at a spectacular elevation of 2615 meters. Reviving scenes of peaks covered with charming white snow, give an amazing experience to the people visiting Naina peak. Tourists can have a stunning and eye-soothing view of Nainital town and Naini Lake from the highest peak of the town.....Read More

The animal lovers can enjoy the collection of different breeds of animals and inhabitants in the Zoo, situated at an altitude of 2100 meters above sea level. Being at a very high point, this Zoo is also known as "High Altitude Zoo". The Zoo is located around 2 km from the bus stand, which is a habitat of animals like Hill Fox, Palm Civet Cat, Leopards, Snow Tigers (Siberian Tiger), Monkeys, Barking Deer, Silver Pheasants, Himalayan Black Bears, White Peacocks, Rose Ringed Prakeet, Wolves and Sambhars etc. This zoo is presently known as Govind Ballabh Pant High Altitude Zoo.....Read More

Situated at an elevation of 2292 meters above sea level, Tiffin Top makes a majesty view of Himalayan ranges from Ayarpatta Hill. Tiffin top is located 4 km from Nainital town with another famous tourist spot, known as "Lands End". In the memory of a British lady named Dorothy Kellet, her husband and followers made a masonry perch on Tiffin Top after her death, called as "Dorothy Seat".....Read More

Lands End is positioned at an altitude of 2120 meters above sea level, adjacent to Tiffin Top. This spot comes to an end by a narrow trek of 1 km from Barapathar, with an amazing view of green valley, nearby hills and small rural houses. Land's End offers an attractive view of the sluggish water of the Khurpatal to the people visiting this beautiful place.....Read More

The Aerial Ropeway starts from northern side of Naini lake and linked with snow view point located at an altitude of 2275 meters above sea level. Wide Himalayan range seems to have a splendid view from Snow View Point. The ropeway carries tourists from the flats and sends them to Snow View Point With two trolleys within two and a half minute.....Read More

Snow coated cliffs of Himalyan ranges like Nanda Kot, Trishul and Nanda Devi give a reviving view from Snow View Point. However, Nainital has lots of nearby mountains and peaks but Snow View Point is the most easily reachable peak in comparison of others. You can access this peak by roads using motor vehicles or by cable cars using aerial ropeway. The place has some point of refreshment like tea shops, restaurants and photographers to capture the moment of your trip.....Read More

This is a recently made tourist spot 1km from Nainital near Kumaon University Campus. There are caves of different kinds with animal models and information about them. There are no real animals there. There is an entry ticket.....Read More

The Raj Bhawan was made in 1899 as the summer residence of the Governor of North West Province. It was designed with Victorian Gothic style by F.W. Stevens. The Raj Bhawan is a two story mansion consisting of 113 rooms, a swimming pool, a large garden and a golf court too. Currently it is the official guest house for the state guests and the Governor of Uttarakhand. You can buy an entry ticket of Rs.30 to explore the Governor's House.....Read More