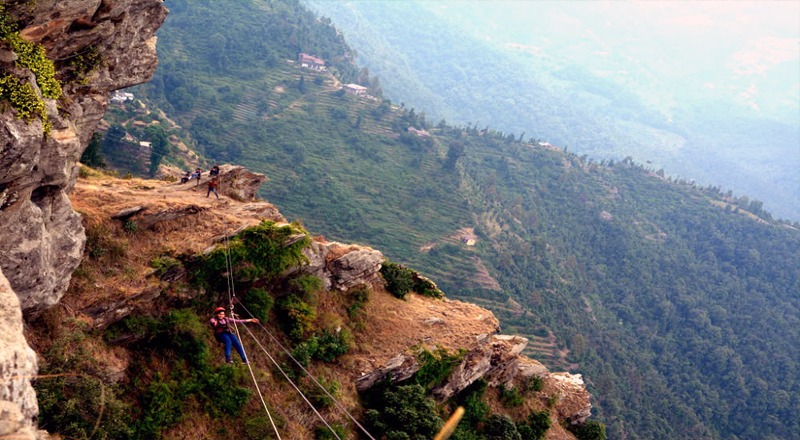 Situated at a distance of 52 km from Nainital, Mukteshwar is an important place in Nainital excursions. It is a 350 year old temple called as Mukteshwar Dham dedicated to Lord Shiva. The temple is stood on the top of a mountain from where the majestic views of breathtaking Himalayan range allure visitors to the beauty of the nearby mountains and peaks. Mukteshwar is surrounded by fruit orchards and dense forests. This place is also known for Indian Veterinary Research Institute (IVRI), which was established by the British rulers in 1898.

Nearby, there is a stone "Chauli ki jali", where childless couples visit to pray Lord Shiva to get children. This place is also famous for the beautiful views of Himalayan range from Chaukhamba peak of Garhwal to the Api-Nampa peaks of Nepal. Mukteshwar boldly deals with deep valley on one side and the attractive town of Almora on the other.

The unspoiled beauty of Mukteshwar offers a lot of things to its visitors. The world famous hunter, Jim Corbett came this place to hunt a tiger and got attached his heart with the pristine beauty of this place. The clattering of birds and sunrise with a shine at the peaks fills a person's heart with love and affection to the nature.

What is the Mukteshwar Geography?

Mukteshwar is positioned at 29.4722째N 79.6479째E. It has an average height of 2,286 meters (7,500 feet). Mukteshwar is rich in picturesque beauty, with outstanding views of the Indian Himalayas including India's second-highest peak, Nanda Devi. Because of the hilly topography, agriculture in the region consists mainly of potato fields and fruit orchards on terraces cut into the hillsides.

What is the History of Mukteshwar?

Mukteshwar owes its continuation as much to the British, as to geography. In 1889 the British set up the grand Bacteriological Laboratory, at the present renamed the Indian Veterinary Research Institute, which saw the rise of a small town. What little employment chance exists in Mukteshwar, separately from tea stalls and a solitary hotel is at the IVRI.

What is places to See in Mukteshwar?

Mukteshwar Temple: A winding, steep stone stairs approaches the Mukteshwar Temple, at a height of 2315 km. Dedicated to Shiva, it has a white marble lingam with a copper yoni. There are 6 idols of Brahma, Vishnu, Parvati, Hanuman, Ganesh and Mandi nearby the lingam.

Chauli Ka Jali : Adjacent to the temple is a natural lattice-work around the rock. Legend states, those barren women who came and touched the lattice, were blessed with a baby. As well there are faint outlines of a sword, a shield and a trunk of an elephant, which bears testimony, of a battle fought here between a demon and a goddess.

Sonapani : Sonapani is 8 km away from Mukteshwar. Sonapani is a amazing place to get pleasure from the rustic feel of Kumaon.

Which is best Time To Visit Mukteshwar?

Best time is all through the year may pass up heavy rainy season and snowy winters. Traffic blocks and flight delays may occur throughout rainy and heavy snow falling days.

What is climate of Mukteshwar?

The summers are cool and enjoyable, while winters are snow bound in Mukteshwar. Just about 52 km from Nainital, Mukteshwar is to be found on one of the highest ridges in the middle Kumaon in Uttarakhand.

How to Reach Mukteshwar?

Q1. Where is Mukteshwar situated?

Ans. Mukteshwar is situated in the Nainital district of Uttarakhand at an altitude of 2171 meters.

Q2. From Where Mukteshwar gets his Name?

Ans. The famous place Mukteshwar gets his name from 350 years old Mukteshwar temple of Lord Shiva which is known as Mukteshwar Dham.

Q3. What is the distance of Mukteshwar from different States?

Q4. When was Mukteshwar renamed?

Ans. Mukteshwar was previously known as Muktesar and renamed after 1947.

Q5. What is the best time to visit Mukteshwar?

Ans. The best time to visit Mukteshwar is considered as summer as it remains wonderful in summer than winter and rainy season.

Q6. What are the top tourist attractions in Mukteshwar?

Q7. When the snowfall occurs in Mukteshwar?

Ans. The snowfall occurs heavily from July to September and occasionally in December and January.

Q8. What is the Charm of visiting Mukteshwar?

Ans. The Charm of visiting Mukteshwar lies in enjoying wildlife and nature such as Tigers, Bears etc.