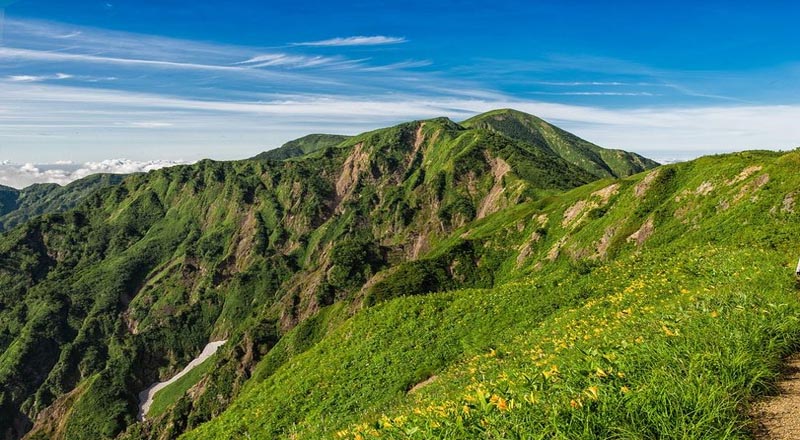 The summer capital of the erstwhile Chand Rajas (7th-18th century), Binsar is a picturesque, sleepy hamlet; one of the most scenic spots in the kumaon Himalayas. Pitched at the impressive altitude of 2,420mtrs, 95kms from Nainital it offers a majestic view of the snow covered Himalayan peaks, the mesmerizing range Chaukhamba, Trishul, Nanda Devi, Shivling and Panchchuli. From here, on a sunny day, you can have a glimpse of the holiest shrines in the Himalaya, Kedarnath, Badrinath and Gangotri.

It's a fascinating spot, encircled by a vast wildlife sanctuary, a home too many rare animals, bird and flowers. Binsar is also a trekker's paradise. Trek in the salubrious air, amidst the misty mountain trails, towering Oaks and Rhododendrons. A formation of sleepy hamlets amidst orchard, silver streams and green meadows. The mantle or green hangs all around-rocks covered with unusual moss and ferns, flowers and shrubs-foliage sprouting out of every conceivable nook and corner of the Hillside. The entire area is now a sanctuary.

Outside Binsar is the temple complex of Jageshwar (34kms). From Almora nestles in a beautiful valley, crested by majestic deodars. This important pilgrimage centre is considered to be one of the twelve Jyotirlingas.

Time just stands still at Binsar. You will keep discovering new walking trails up the mountains and down the valleys, new lookout points for another spectacular sunset. This intimate little hill retreat makes you feel that nothing can ever come between you and nature.

Binsar Hill : Locally known as Jhandi Dhar, it offer panoramic view of the Kmuaon Hills and the Greater Himalayas, from an altitude of 2,420mtrs.In the night, the lights of the Almora town look fascinating.

Khali Estate :The erstwhile royal palace. Once occupied by Sir Henry Ramsay and later on by Smt. Vijaylakshmi Pandit. It now houses a heritage hotel.

Gananath Temple : The holiest shrine in the region, at the height of 2,116mtrs. During Kartik Purnima a fair is held in the area, when the whole place turns into a magic land pulsating with folk songs and folk dances, running through the nights.

Binsar Wildlife Sanctuary : Binsar Wildlife Sanctuary was founded in the year 1988 with the aim of conserving and protecting the forests of Quercus (broad leaf oak) of the central Himalayas. It is spread between the altitudes of 900 m and 2500 m. It is a rich forest of Indian biodiversity. Being home to more than 200 species of birds including Blackbirds, Kalij Pheasant, Magpies, Forktail, Koklas, Laughing Trush, Eagles, Monal, Eurasian Jays, Nuthatches, Parakeets and many species of butterflies, Binsar Wildlife Sanctuary has been acknowledged as an "Important Bird Area" by Bird Life International. The fauna at Binsar Wildlife Sanctuary includes some rare Himalayan species. Some of the natives here are Chital, Jungle Cat, Leopard, Nemorhaedus Goral, Musk Deer, Black Bear, For, Pine Marten, Sus Scrofa, Monkeys, Langurs, Flying Squirrel, Porcupines, barking deer etc. It also houses many reptiles.

Binsar experiences a healthy climate throughout the year. It is pleasant in summers with temperature ranging between 15⁰C and 30⁰C in the months of April, May and June. The monsoon is the best time for couples to visit Binsar. The varied greenery surrounded by misty clouds from all sides makes Binsar a romantic getaway during the Monsoon months from July to September. Binsar receives snowfall during the winter months from October to February and it becomes cold. The maximum temperature is around 24⁰C while the minimum can drop to 0⁰C. It is the best time to visit Binsar for honeymooners, nature lovers and bird watchers. The best time to be at Binsar is the Summer and during the months of October and November.

How to Reach Binsar

Road : Distance from the nearest major town Almora is 30kms.Nainital is 96kms away. From Delhi it 410kms.

Where to Stay Binsar

Jaina : At a distance of 59kms situated at a lofty height of 1677mtrs.It provides fascinating view of the Himalayan peaks. Full of orchards producing apples, apricots, peaches, pears and other alpine fruits.

Shiva Temple :A cave temple, 31kms, from Binsar is highly revered by the people in the hill. Set amidst dense forest of Oak and Deodar; it's of much archeological importance.

Gananath Temple : The holiest shrine in the region, at the height of 2,116mtrs. During Kartik Purnima a fair is held in the area, when the whole place turns into a magic land pulsating with folk songs and folk dances, running through the nights.

Nainital : 96kms from Binsar, dotted with lakes, Nainital has earned the epitheln of 'Lake District' of India. The most prominent of the lakes is Naini Lake surrounded by hill.