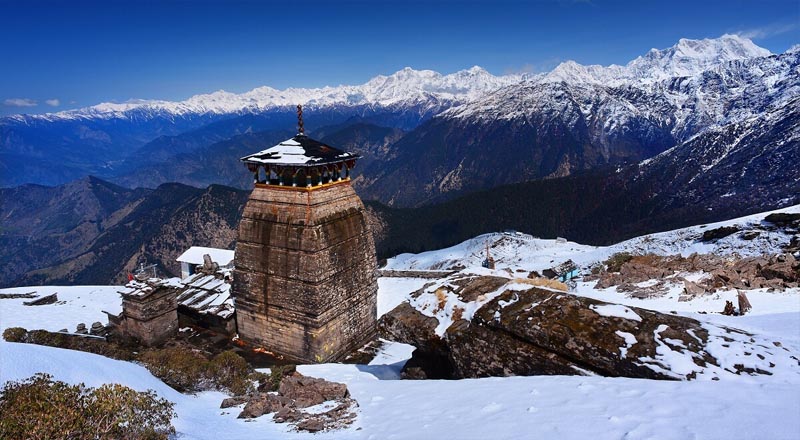 Binsar is a small town in the state of Uttarakhand that is most famous for its Wildlife Sanctuary. Located in the Jhandi Dhar Hills of the Kumaon region, Binsar is situated at a height of 2412 m above sea level and is known for the greenery surrounding the region. The virgin forests in Binsar consist of oak, rhododendron, pine and deodar. These forests are abundant in wild animals like deer, leopard, chital, jungle cat, barking deer, porcupine, musk deer, Himalayan bear, monkey, fox and flying squirrel in an area spread across 45.59 sq km. There are around 200 varieties of birds found in these forests, making it a much sought after destination among wildlife enthusiasts and bird watchers.

Binsar is a unique destination where you can relax, do nothing and enjoy the nature and calm of Himalayas. There are many places to see in Binsar and many places near Binsar are worth visiting.

Bageshwar is a famous excursion to Binsar located at a distance of just 60 km from the town. It derives its name from an ancient temple, Bagnath, dedicated to Lord Shiva. It is believed that Lord Shiva wandered in this areas in the form of a Tiger, hence the name Bagnath. The temple is located on the confluence of river Gomti and Saryu. Bageshwar is also the base camp for the Pindari trek.

Jageshwar also is a temple dedicated to Lord Shiva and is a very important destination in Kumaon. The place is located at an altitude of 1870 m 56 km away from Binsar. Jageshwar temple is surrounded by thick forest of deodar. It is one of the twelve Jyotirlingas of Lord Shiva and holds great mythological importance among the Hindus. The architecture of the temple is ancient and beautiful.

Kausani, a charming hill station in Kumaon, is 48 km away from Binsar. It is well known for its extraordinary beauty the Mother Nature has bestowed on it. It is the birth place of a famous Hindi poet Sumitra Nandan Pant. It is also famous for Mahatma Gandhi's fascination for its natural beauty and his book Anasakti Yoga that he wrote while staying in Kausani. There is a lot to see in Kausani too.

59 km away from Binsar at an altitude of 1677 m is a place full of fruit orchards known as Jaina. Jaina has orchards of apples, peaches, apricots, pears and many other fruits. Jaina too is a naturally beautiful post. The orchards are enchanting and worth a visit.

Located at a distance of about 30 km from Binsar is the ancient temple of Kasar Devi Temple. The temple dates back to the 2nd Century AD. It is said to be constructed by King Rudra. Kasar Devi temple, although a mythologically important place, found recognition in the year 1920 when Swami Vivekananda stayed here to meditate. The temple is surrounded by breathtaking Himalayas.

Located at a distance of 44km from Binsar is the Chitai Temple dedicated to Gollu Devta. This temple is a manifestation of Gaur Bhairav. It is believed that if somebody prays with his clear heart in this sacred temple, his wish definitely come true. Across the premises of temple, there are thousands of bells are strung and each worshipper is supposed to string a bell against his wish. Some worshippers write letters to Gollu Devta so that their wish can be fulfilled. Bunches of bells as well as stack of letters can be found all over the temple premises.

Famous for outstanding beauty, views of the Himalayan ranges, wonderful wildlife, delicious cuisines, enriching heritage and exclusive handicrafts, Almora is one of the most visited excursions of Binsar. It is situated at a distance of approximately 38 km from Binsar. Thousands of tourists come to visit this picturesque landscape of Almora every year. The town of Almora was developed by The Chand dynasty and later on British rulers developed and maintained this town.

Near to Binsar, there is a very ancient Sun temple which is assumed to be of almost 800 years old. There are very few Sun temples across the entire India and it is one of the most ancient of them. The name of this temple is Katarmal Sun temple. This temple is the house of ancient and religiously important statues built in ancient sculpture art of India. This temple holds an idol of Surya Devta, the god of light.

Nanda Devi temple is located in Almora at a distance of 30 km from Binsar. It is dedicated to goddess Nanda Devi the most revered goddess in Kumaon and Garhwal and the destroyer of all evil. A very popular fair is held around the temple on the Ashtmi of Shukla paksh of Bhadrapad. On Navmi a procession is taken in and around the whole town. Nanda Devi temple is a revered shrine and a beautifully located monument.