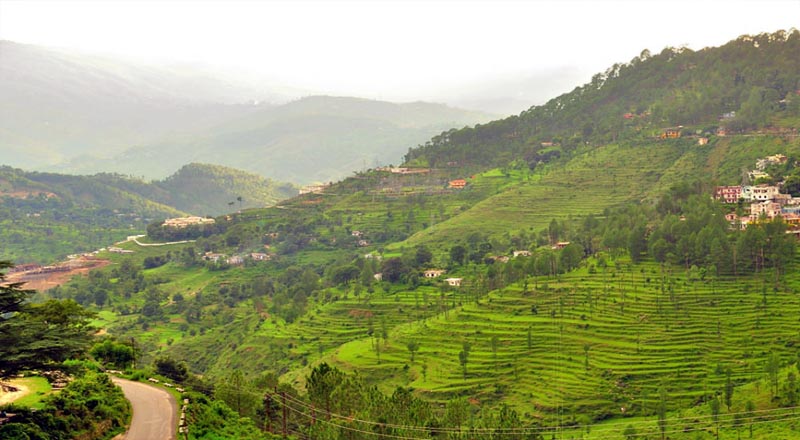 Almora is a municipal board, a cantonment town in the Almora district in the state of Uttarakhand, India. Almora was founded in 1568. It is considered the cultural heart of the Kumaon region of Uttarakhand. Nearest railway station is Kathgodam 85 km. from city bus station.

Almora is located at 29.62°N 79.67°E. It has an average elevation of 1,651 meters (5,417 feet). It is located on a ridge at the southern edge of the Kumaon Hills of the Himalaya range. In the shape of a horse saddle shaped hillock, it is surrounded by thick forests of pine and fir trees. Flowing alongside the city are rivers of Koshi, (Kaushiki), and Suyal (Salmale). The snow capped Himalayas can be seen in the background. Almora got its name from "Kilmora" a short plant found nearby region, which was used for washing the utensils of Katarmal Temple. The people bringing Kilmora were called Kilmori and later "Almori" and the place came to be known as "Almora".

The very old town of Almora, before its establishment was under the possession of Katyuri king Baichaldeo. He donated main division of this land to a Gujrati Brahmin Sri Chand Tiwari afterward when Chand kingdom was founded in Baramandal, the town of Almora was founded at this centrally situated place in 1568 by Kalyan Chand. In the days of the Chand Kings it was called Rajapur. The name 'Rajpur' is also mentioned over a number of ancient copper plates. In the 1960s Bageshwar district and Champawat district had not yet been formed and were part of Almora district.

Almora has many noted temples, including Kasar Devi, Nanda Devi, Doli Daana, Shyayi Devi,Khakmara, Asht Bhairav, Jakhandevi, Katarmal (Sun Temple), Pataal Devi, Raghunath Mandir, Badreshwar, Banari Devi, Chitai temple, Jageshwar, Binsar Mahadev, Garhnath and Baijnath. Kasar Devi temple was visited by Swami Vivekananda and this area also has a Chabad House. Rudreshwar Mahadev Temple, near Sanara Ganiya, is dedicated to Lord Shiva. It is situated beside the river Ram Ganga. A sun temple (only the second in the world) is located at Katarmal within a short distance from the town. The famous temple of Manila Devi, Devi Maa, the family goddess of the Katyuri clan, lies around 85 km from Ranikhet. Udaipur a famous temple of Golu devta is situated 5 km. from Binta near Dwarahat. Dunagiri has the highly revered temple of Shakti or Mother Goddess. Dunagiri is also known as the birthplace of modern day Kriya Yoga.

Places to See in Almora

Bright End Corner : Almora is 2kms away from here. A highlight of this point is the sunset and the sunrise seen through the Himalayan peaks. A circuit house close by allows tourists to spend some time in this peaceful surrounding. Close by is the Vivekanand Library which has many books on literature.

Chitai Temple : Chitai temple is very well-known temple in this region many people of Kumaon come here and worship of lord Golu. This temple is devoted to Lord Golu.

Kasar Devi: Kasar Devi temple is Near of Kalimutt. This was built in the second century. The distance between Kasar Devi and Kalimatt is very less. You can without difficulty cover it by foot.

Nanda Devi Temple :This is thousand year old temple. This is the one major attraction of Almora. Every year a great festival held here.

State Museum : This museum is near the bus stand. It is closed on Mondays and other Government Holidays. It is open from 10:30 A.M. to 4:30 P.M.

Deer Park : Deer Park is 3 kms away from Almora.

Simtola : 3 kms from Almora Simtola is a picnic spot from where one can view the beautiful mountains covered with pine and deodar trees.

Kalimutt : 4.5kms from Almora, this picnic spot gives a beautiful vision of the Himalayan Peaks.

Martola : This picnic spot amidst gardens is 10 kms away from Almora. Most of the people who live here are foreigners. Buses and taxis come up to a point called Panuwanaula and from there onwards one has to walk.

Almora Fort : The Almora Fort, presently the office of Distric Collector of Almora is a fine example of the Chand Dynasty architecture. It is located at the highest point of the Almora Market and offers a bird's eye view of the whole town and the surrounding countryside.

Fairs and Festivals of Almora

Doonagiri Mela :Doonagiri, noted for its very old Durga Temple, is a pilgrim spot that attracts a large of pilgrims, throughout the fair days at Navratri in October.

Kasar Devi Mela : A fair is held twice a year, throughout winter and summer months, in the charming and older part of the town. The fact that the great Swami Vivekananda came to Almora and gained enlightenment in a small cave at Kasar Devi adds the trivia to give a lot more significance to the place.

Shrawan Mela, Jageshwar fair in July and August, Gananath Mela in October-November and Dwarahat Mela held in April are some other important festivities of the region.

Almora is positioned at a height of 1,638 meters. It has a moderate kind of weather. The summers are warm in the daybreak and enjoyable in the evenings. The temperatures in summer vary between 15 and 30 degrees Celsius. The winters are cold and sunny throughout the daytime while the nights are very cold with temperatures falling below the zero degree mark. The monsoon season starts in July and can last till September.