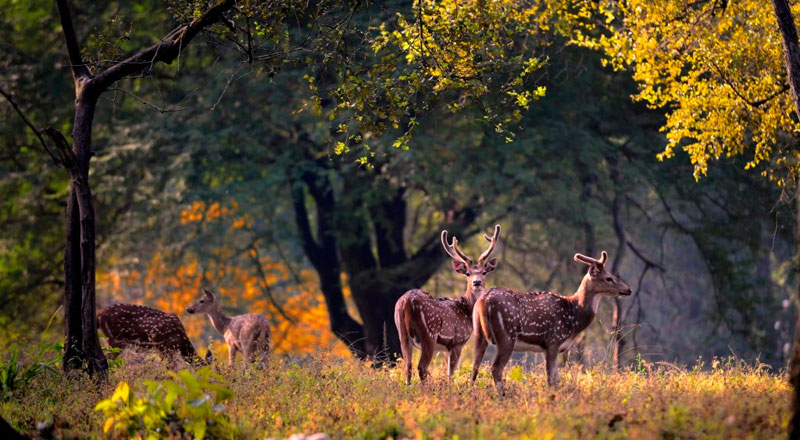 Q 01: What is the history of Jim Corbett National Park?

Some areas of the park were formerly part of the princely state of Tehri Garhwal. The forests were cleared to make the area less vulnerable to Rohilla invaders. The Raja of Tehri formally ceded a part of his princely state to the East India Company in return for their assistance in ousting the Gurkhas from his domain. The Boksas—a tribe from the Terai—settled on the land and began growing crops, but in the early 1860s they were evicted with the advent of British rules.

Efforts to save the forests of the region began in the 19th century under Major Ramsay, the British Officer who was in-charge of the area during those times. The first step in the protection of the area began in 1868 when the British forest department established control over the land and prohibited cultivation and the operation of cattle stations. In 1879 these forests were constituted into a Reserve Forest where restricted felling was permitted.

In the early 1900s several Britishers, including E. R. Stevans and E. A. Smythies, suggested the idea of setting up of a national park on this soil. The British administration considered the possibility of creating a game reserve there in 1907. It was only in the 1930s that the process for demarcation of such an area got underway, assisted by Jim Corbett, who knew the area well. A reserve area known as Hailey National Park covering 323.75 km2 (125.00 sq mi) was created in 1936 when Sir Malcolm Hailey was Governor of United Provinces, and Asia's first national park came into existence. Hunting was not allowed in the reserve, but only timber cutting for domestic purposes. Soon after the establishment of the reserve, rules prohibiting killing and capturing of mammals, reptiles and birds within its boundaries were passed.

The reserve was renamed in 1954–55 as Ramganga National Park and was again renamed in 1955–56 as Corbett National Park. The new name honours the well-known author and wildlife conservationist Jim Corbett, who played a key role in creating the reserve by using his influence to persuade the provincial government to establish it.

The park fared well during the 1930s under an elected administration. But during the Second World War, it suffered from excessive poaching and timber cutting.Over time the area in the reserve was increased—797.72 km2 (308.00 sq mi) were added in 1991 as a buffer for the Corbett Tiger Reserve.The 1991 additions included the entire Kalagarh forest division, assimilating the 301.18 km2 (116.29 sq mi) area of Sonanadi Wildlife Sanctuary as a part of the Kalagarh division. It was chosen in 1974 as the location for launching Project Tiger, an ambitious and well known wildlife conservation project. The reserve is administered from its headquarters in the district of Nainital.

Corbett National Park is one of the thirteen protected areas covered by World Wildlife Fund under their Terai Arc Landscape Programme. The programme aims to protect three of the five terrestrial flagship species, the tiger, the Asian elephant and the Great One-horned Rhinoceros, by restoring corridors of forest to link 13 protected areas of Nepal and India to enable wildlife migration.

Q 02: What is the Geography of Corbett National Park

Banks of the Ramganga reservoir in the Dhikala grasslands of Corbett Tiger Reserve.

The park is located between 29°25' to 29°39'N latitude and 78°44' to 79°07'E longitude. The average altitude of the region ranges between 360 m (1,181 ft) and 1,040 m (3,412 ft). It has numerous ravines, ridges, minor streams and small plateaus with varying aspects and degrees of slopes. The park encompasses the Patli Dun valley formed by the Ramganga River. It protects parts of the Upper Gangetic Plains moist deciduous forests and Himalayan subtropical pine forests eco regions. It has a humid subtropical and highland climate.

The reserve, located partly along a valley between the Lesser Himalaya in the north and the Shivaliks in the south, has a sub-Himalayan belt structure. The upper tertiary rocks are exposed towards the base of the Shiwalik range and hard sandstone units form broad ridges. Characteristic longitudinal valleys, geographically termed Doons, or Duns can be seen formed along the narrow tectonic zones between lineaments.

Q 03: What is the attraction of Corbett National Park?

The Corbett National Park is measured as the well sheltered and as well the leading attractions of the country. The park has been developed by the Jim Corbett on the Himalayan mountain range and is the most visited place in the country. The fauna of the park includes the mammals, birds, reptiles and fishes.

Fishes: The Kalabasu, Chilwa, Mahaseer, Kalimuchi, and Gooch are the popular breeds of the fishes that are found in the Corbett National Park.

Reptiles: The reptiles in the park includes the Ghariyal, King Cobra, Indian Crocodile, Russels Viper, Python and the monitor lizard are the well-liked reptiles of the park.

Q 04: Where is the Safari Zones in Corbett National Park?

Q 05: What is the near by Places in Corbett National Park?

Corbett Water Fall: This pristine waterfall is a treat for those who are looking for a nonviolent time amidst the wilderness. Corbett Waterfalls is 25 km away from Ramnagar, it offers a chance to the nature lovers to camp and bask in the cherished silence.

Corbett Museum: The region on which the museum is at present standing was once the home of Mr. Jim Corbett, who was a hunter in his early life. Do not fail to remember to buy a memorabilia from here.

Sitabani Forest Reserve: The place magnetizes millions of bird watchers yearly. It is also to be the place where Goddess Sita rested throughout the exile, and a very old temple dedicated to Sage Valmiki is also positioned in the reserve.

Garjiya Devi Temple: This revered shrine is to be found on the bank of Koshi River amidst the Jim Corbett National Park. The temple is sacred to Garijiya Devi and is regularly visited by devotees throughout November to December.

Sunrise Point: This is the uppermost peak in the park. From the top of the point, traveler can see the picturesque vision of both Kosi and Ramganga rivers along with the surrounding region of Bhuwankhal village.

Sitabani Temple: To be found 20 kms. Away from the Ramnagar, the temple is extremely approached throughout the day of Ramnavami.

Dhangari Museum: To be found at the entry of Jim Corbett National Park, Dhangari Museum is a place to catch sight of Wildlife reserve's history. Here travelers can spot the carcasses of animals that died naturally or in a fight, like tigers, Tusker, deer, leopard, crocodiles, etc.

Q 06: Which type of flora in Corbett National Park?

A total of 488 different species of plants have been recorded in the park. Tree density inside the reserve is higher in the areas of Sal forests and lowest in the Anogeissus-Acacia catechu forests. Total tree basal cover is greater in Sal dominated areas of woody vegetation. Healthy regeneration in sapling and seedling layers is occurring in the Mallotus philippensis, Jamun and Diospyros tomentosa communities, but in the Sal forests the regeneration of sapling and seedling is poor.

Q 07: What is the climate of Corbett National Park?

The weather in the park is temperate compared to most other protected areas of India. The temperature may vary from 5 °C (41 °F) to 30 °C (86 °F) during the winter and some mornings are foggy. Summer temperatures normally do not rise above 40 °C (104 °F).Rainfall ranges from light during the dry season to heavy during the monsoons.

Q 08: Which type of hotels and resorts in Corbett National Park?

Q 09: What is the distance of Jim Corbett from different States?

Q 10: How many Safari zones are there in Jim Corbett?

Q 11: Which is the best zones in Corbett National Park?

Ans. Dhikala and Bijrani are the best and most popular zones of Corbett National park.

Q 12: What is Sightseeing places in Jim Corbett?

Q 13: What is attractive famouse national parks in Uttarakhand?

Q 14: What is distance Corbett National Park from the major cities?

How to Reach Corbett National Park

By Air: The closest domestic airport is Pantnagar Airport, which is 80 km away. New Delhi is the nearest International airport.

By Train: Ramnagar (5 km), which is the nearest railway station, is well connected to all major Indian cities.

By Bus:The Park is connected to all major destinations within and outside the state by motorable roads. Visitors can easily hire a private taxi or state-owned buses to arrive at the park.