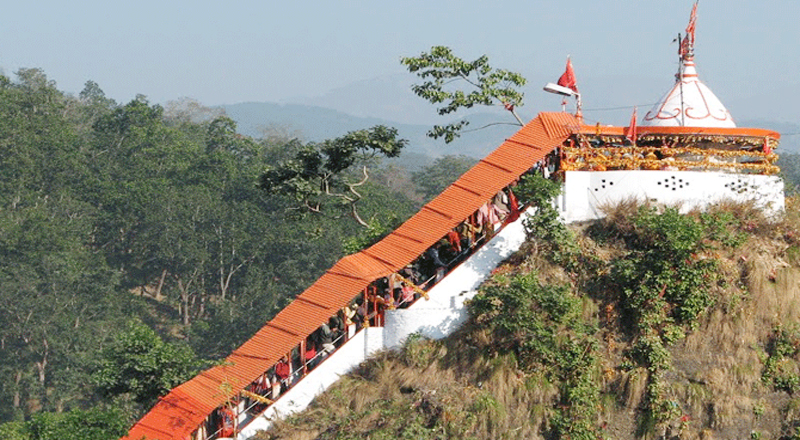 Nainital is one of the most prominent travel destinations in North India. Recognized for its mesmerizing attractiveness and magnificent culture and people, people from across India and other nation flock this town in huge number. And not very far lays a gorgeous wildlife reserve also known as Corbett national park. The famous park is considered for its verdant greenery and wide range of wildlife creatures. It is said that tour to Jim Corbett is unfinished without a sneak peak to Nainital.

About 3 km from Corbett national park on the road to Dhikala there is situated this beautiful excursion on the banks of Kosi River. The Garjia temple is dedicated to goddess Durga and is perched on the top of a huge rock. The place is good for bathing and offers and enchanting view of the Kosi River. The temple is visited by thousands of devotees especially on the occasion of Kartik Poornima when a fair is held here. The Temple derives its name Garjia from the many names of the deity Durga......Read More

This is the most attractive of the Corbett national park excursions. Located at a distance of 25 km from Ramnagar and 4 km from Kaladhungi, on the Kaladhungi Ramnagar highway is the beautiful Corbett Waterfalls. It is a unique area in the periphery of the national park surrounded by dense forest and the most dazzling natural beauty. The cool, clear water cascading from a height of 20 m allures both nature and adventure lovers.....Read More

The Dhangarhi Museum to be found close to Dhangarhi gate is an ideal halt for opening time wildlife fans. Museum glass boxes the life and ambiance of Corbett Park. The museum is one of the main attractions of the town which is as well the part of the Corbett National Park. The skeleton of the several species of animals such as tigers and elephants are preserved in the display cases.....Read More

Kosi River is an endless river that flows along the extended stretches of Jim Corbett National Park. The river forms eastern border of the park from Mohan through Dhikuli till Ramnagar. It is occupied by a kind of fish called Masheer that attracts lots of moving birds. Travelers can get pleasure from angling activity through the months of October to June each year.

Sunrise Point in the Corbett is the uppermost peak which is well-known for a superb sunrise sight. Merge of Ramganga and Kosi River in between the thick forest can be observed from this altitude. The place is also well-known for an oldest bungalow built by Britishers. One can get pleasure from the fine glimpses of real natural attractiveness of Corbett National Park.

If a hill station is the perfect antidote to summer blues than Nainital stands best among the other famous destinations. Because of its close proximity to the national capital, Nainital has emerged as a much sought after summer retreat over the years. Sneak out of the city and you will find Nainital nestled in the Himalayan wilderness to sooth your senses. Innumerable tourists and the green hills along side the famous Naini Lake is an ideal summer time sight to behold. Besides this, the colonial charm of this small town is an equally enchanting experience.....Read More

Bhimtal Lake is situated in a small town of Bhimtal in Uttarakhand. It comes in the Nanital district (a famous hill station of Uttarakhand). Being the largest lake of the district and the second largest of Kumaon is situated at an altitude of 1370 meters. The lake derives its name from the Indian epic (Mahabharat).The Bhimtal Lake covers an area of 1701 metres by 265 metres. There is an island situated in the midpoint, which act as an exquisite gem. One can plan a boat sail to the Lake and enjoy the beautiful scenic beauty of the place. Nested amidst the green Kumaoun Hills, Bhimtal Lake is a popular tourist spot.....Read More

Ranikhet is situated in Uttaranchal. It is located at the height of 6000 ft above sea level in the Kumaon hills. It is 54 km from Nainital. Ranikhet reflects the very best of the heavenly Himalayas, its lush green forests, majestic mountain peaks, exotic plant life and attractive wild life. To see nature and its elements in full harmony, the right place to be is Ranikhet.....Read More