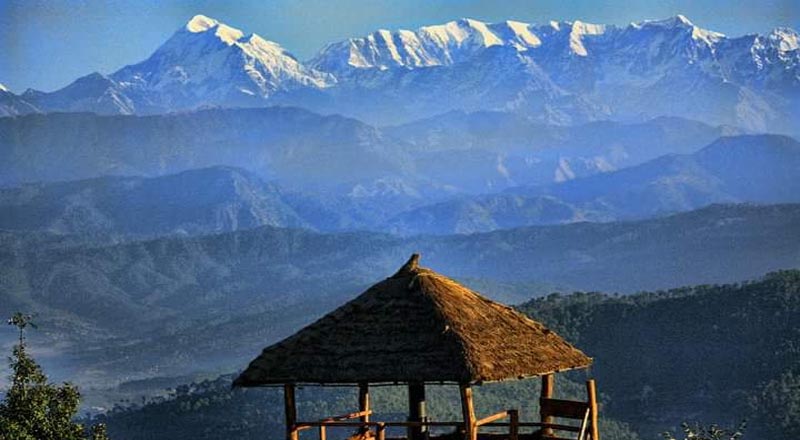 Kausani is an incredible natural destination of India and also is a base to many beautiful places. Many famous hill stations like Nainital, Ranikhet, Almora, Bageshwar etc fall into Kausani excursions. One can also go on many treks from Kausani including trek to Pindari glacier and Adi Kailash trek.

Kausani, the charming hill station is geographically located in the Bageshwar district of the Indian state Uttarakhand. Kausani is situated about 53 kilometers away from Almora. The nearby Himalayan peaks that the land beholds with pride become the major tourist attractions for visitors enjoying tour to Kausani. Tourism in Kausani is featured with dense pine trees. The lush green dense surroundings with its splendor view of the Himalaya makes Kausani a perfect picturesque place that every traveler desires to see and experience.

Located at a distance of about 11 km from Kausani it the famous temple of Someshwar dedicated to Lord Shiva. The temple is named after its founder King Som Chand of Chand dynasty and the deity Maheshwara (Lord Shiva's another name). The temple is of great religious importance among the Hindus.

Baijnath is a temple famous for its spiritual and historical heritage. It is located 16 km away from Kausani in the Garuda valley on the banks of River Gomti. Fishing is strictly prohibited in the temple premises. One can feed fishes of the Gomti River with a packet of Chana or balls of wheat flour. The main attraction of Baijnath Temple is the idol of Goddess Parvati made of black stone in the main enterance. Another temple dedicated to Maa Kali known as Kot ki Maai is located at a distance of 8km.

Ranikhet is another enchanting hill station of Kumaon situated 76 km away from Kausani. It is headquarters of the Kumaon Regiment and the Naga Regiment of the India Army. The name means Queens Meadow and is thus named after the beautiful lush greens meadows Ranikhet is rich in. This place has a vast biodiversity and offers refreshing views of the great snow-capped Himalayan peaks.

The hill station of Nainital in the Kumaon region of Uttaranchal, was a popular summer resort for the British during the time when they ruled India. He has the composure, called Emerald Lake Naini and action-filled band, The Mall, lined with restaurants, shops, hotels and markets. Enjoy one of the many forest trails, explore the area on horseback, or relax on a boat in the lake.

Almora, located at a distance of 47 km from Kausani, is an invigorating excursion of Kausani. This town is famous for its rich cultural heritage, traditional handicrafts, appetizing cuisine, unique wildlife and exquisite view of the Himalayas. One can spend a day or two here doing nothing and enjoying the atmosphere. There is much to see in Almora too.

Mukteshwar is primarily famous for a 350 year old temple, Mukteshwar Mahadev, dedicated to Lord Shiva. The town offers great panoramic views of the Himalayas. The town itself was developed by the British for research and education purposes in the year 1893.

This is a very special temple located at a distance of 100 km from Kausani. It is so called because of its unique architecture. Patal Bhuvaneshwar is famous for its stone carvings. The Temple is located below the ground and is reached through a narrow way in the shape of a tunnel. One has to climb down around 200 almost vertical steps. The temple is said to be the abode of all the 33 Crore Gods and Goddesses.