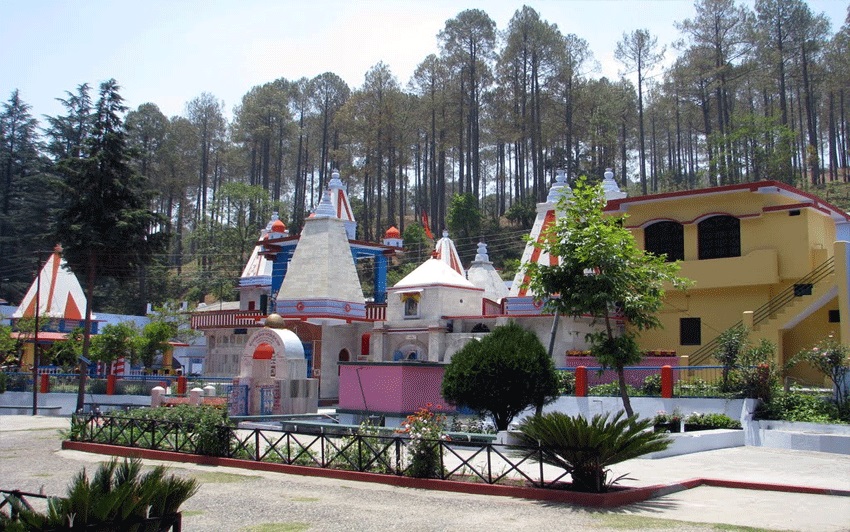 A tiny hill station and a cantonment town in Uttarkhand, Ranikhet is situated on an altitude of 1869 m from where one can enjoy the view of western peak of Himalayas. The region witnesses snowfall in the winters while summers remains moderate making it an ideal destination to be visited round the year. Ranikhet is covered with beauteous pine, oak, deodar forests providing favourable conditions for breeding of leopards, leopard cat, jackal, red fox, langur and porcupine. The tour packages to Kumaon are laced with enormous green sceneries out of which Ranikhet is one stunning one providing apt location for romancing couples and others looking for tranquil environs.

Ranikhet is one of the most beautiful locations in the Himalayas. The excursions to Ranikhet are equally enchanting. Ranikhet excursions include some really beautiful temples, interesting locations and some historical monuments. We have listed here some of the major excursions of Ranikhet.

This temple is a major Ranikhet excursion located 17 km from the town. It is surrounded by deodar and pine woods and is an ideal place for mental peace and solace. Lord Shiva is the resident deity here. The temple was constructed by King Kalyan, a ruler of Chand Dynasty. There is an ashram dedicated to Binsar Mahadev near the temple. Some major peaks of the Himalayan Ranges are visible from here including Nanda Devi, Kedarnath etc.

Khairna is a famous fishing spot 30 km away from Ranikhet. It is located on the banks of Kosi River. The Khairna Bridge falls on the route between Ranikhet and Nainital. There is a rest house of Kumaon Mandal Vikas Nigam nearby and a place where one can get refreshments at Garampani.

Located at a distance of 25 km from Ranikhet, Sitlakhet is a picturesque destination. It is the haven of nature covered with fruit orchards, medicinal herbs and dense forests. It is famous for the temple of Syahi Devi just 3 km away. Grand fairs are held here during the Navratri. The 3 km are covered by a trek route and one can find excellent flora and some rare wildlife on this trek. This temple is known to be the savior of Almora.

This small historical town is located 33 km away from Ranikhet enroute to Karnaprayag. The town of Dwarahat was the capital of the Katyuri Kingdom in former days. The remains of many temples of that time lie scattered over the whole town. These are ancient temples and are famous among the local people of Kumaon. Some of them are Dhwaj temple, Kachri Devtas, Maniyan and Mrtyunjaya. A famous and interesting fair is held every year in the month of April in Dwarahat known as Syalde Bihauti.

Manila ( significance wonderful ) is 87kms. from Ranikhet and 75kms. from Ramnagar. Manila is the chair of Manila Devi - close relatives members Goddess of the Katyuri group. The woodlands and the Himalayan perspective from this mountain is wonderful.

10kms. away and famously known as orchard nation, instructions a stunning perspective of the Himalayas.

13kms. from, Ranikhet, on the way to Almora, Majkhali provides a near perspective of the wintry levels.

3kms. from Chaubatia, known for its synthetic pond and have a eat outside areas.

Tarikhet is a village famous as a center of freedom struggle. It is said that Mahatma Gandhi stayed here during the freedom struggle. It is a naturally beautiful village famous for the temple of Golla Devta and Gandhi Ashram. Prem Vidyalaya was established here by Bhagirath Pandey in 1929 under his Non-Cooperation Movement. The environment of Tarikhet is peaceful and calm. It gives solace to one soul.

Nainital is a prominent tourist place famous among adventure lovers and those seeking a calm and serene getaway. The Biritish called Nainital as the "Westmoreland of Kumaon". Situated in the Kumaon region of Uttarakhand. Nainital is named after the Naini Lake situated in the center of the town. The lake is famous for its mythological value in the Hindu religion. It is believed that when Lord Shiva carried the burnt body of his wife and beloved Sati over the mountains, some of her parts fell in the mountains which are now worshipped as Shakti Peets. Naini Lake is considered to be one of them.Read More

Almora is situated at an altitude of 1,640 m above sea level and built on a horse shoe shaped ridge of a hill spread over 5 km. The eastern part of this ridge is called Talifat whereas the western side is known as Selifat. Almora is known for its panoramic view of the Himalayas, cultural inheritance, outstanding beauty, delicious cuisines and exclusive handicrafts. On the east of the Almora is Pithoragarh, on the west is the Garhwal region, on the north is Bageshwar and on the south is Nainital.....Read More

5kms. from Ranikhet, on the primary street to Almora is one of the best 9-hole programs in the place and is enclosed by lavish maple jungles. The Kali forehead and a woodlands baby's room nearby are value viewing. It could be an perfect place for movie capturing.